The issue of a vote on the charter has already sparked controversy, with nationalists, among them Buddhist monks, angered at a Feb. 2 decision by parliament to grant Rohingya Muslims the right to vote in a referendum, possibly paving the way to allow them ballots in the general election. 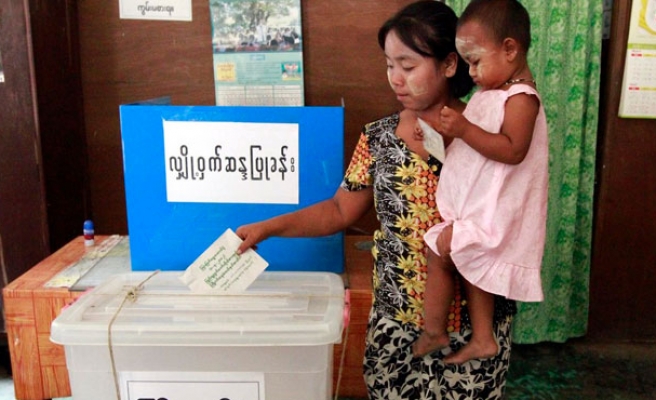 Myanmar's president has given the green light to hold a referendum this year on amendments to a military-drafted constitution, two lawmakers said on Wednesday, a vote that could be a political game-changer in the fledgling democracy.

President Thein Sein gave his approval late on Tuesday to hold the plebiscite, which could take place as early as May, ahead of a general election due late this year that could see a shakeup of a political system over which the military effectively holds veto power.

A referendum is likely to be welcomed by Nobel laureate Aung San Suu Kyi, whose opposition National League for Democracy (NLD) party has been pushing to change a constitution that it says grants too much political power to the military, which ruled Myanmar brutally from 1962-2011.

"Now that the law has been enacted, the Election Commission is soon expected to name a suitable date for the referendum in May," Thein Nyunt, a lower house lawmaker, told.

Upper house representative Aye Maung also confirmed the president had given approval. It is unclear, however, what possible changes to the constitution would be addressed in the vote.

The NLD submitted a petition with nearly five million signatures last year calling for a change to a clause that requires more than 75 percent house support to amend the charter.

Critics say the 2008 constitution grants what amounts to a veto for the military, which has a 25 percent quota of legislative seats for unelected servicemen.

The NLD has criticised another clause that bars Suu Kyi from becoming president because her two sons are British citizens, a chapter U.S. President Barack Obama said made "no sense". Suu Kyi's late husband was British.

The issue of a vote on the charter has already sparked controversy, with nationalists, among them Buddhist monks, angered at a Feb. 2 decision by parliament to grant Rohingya Muslims the right to vote in a referendum, possibly paving the way to allow them ballots in the general election.

About 300 people rallied in Yangon on Wednesday to demand the revocation of the right of holders of temporary identification cards, known as white cards, to vote in the plebiscite, arguing many were illegal aliens.

Roughly two-thirds of the white-card holders are Rohingya Muslims, who are widely resented in the Buddhist majority nation, where many people consider them illegal immigrants from Bangladesh.

Though few Rohingyas are full citizens, some were permitted to vote in a referendum on the 2008 constitution.

Rohingyas live in apartheid-like conditions in Western Rakhine state and have borne the brunt of sectarian violence that has killed hundreds in the past two and a half years.

"They are foreigners," said Buddhist monk U Kavinda. "It's completely senseless to grant these aliens the right to vote. We can't tolerate this."