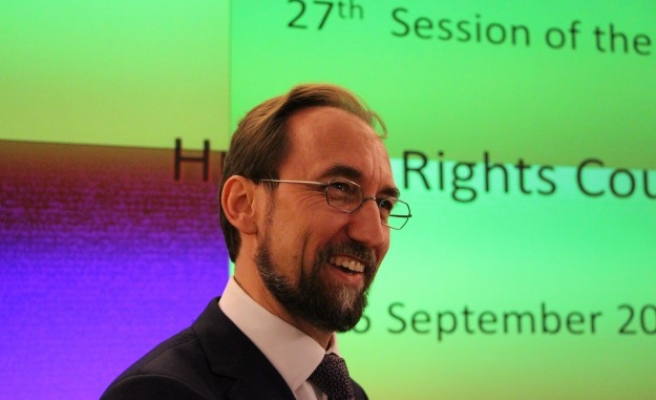 The new U.N. human rights chief urged world powers on Monday to protect women and minorities targeted by ISIL militants in Iraq and Syria, saying the fighters were trying to create a "house of blood".

Jordan's Zeid Ra'ad al Hussein, the first Muslim to hold the position, called for the international community to focus on ending the "increasingly conjoined" conflict in the two countries, and abuses in other hotspots from Ukraine to Gaza.

ISIL's fighters have over-run large parts of Syria and Iraq since June, declaring a cross-border caliphate. The Geneva-based U.N. Human Rights Council last week agreed to send a team to investigate killings and other abuses carried out by the group on "an unimaginable scale".

Zeid, Jordan's former U.N. ambassador and a Jordanian prince, described ISIL in his maiden speech to the Council as "takfiris" - militants who justify killing others by branding them apostates.

"Do they believe they are acting courageously? Barbarically slaughtering captives? ... They reveal only what a Takfiri state would look like, should this movement actually try to govern in the future, said Zeid who succeeds Navi Pillay in the Geneva hotseat.

"It would be a harsh, mean-spirited, house of blood, where no shade would be offered, nor shelter given, to any non-Takfiri in their midst," Zeid added.

He called on Iraq's new government and prime minister to consider joining the International Criminal Court (ICC) to ensure accountability for crimes committed there.

"In particular, dedicated efforts are urgently needed to protect religious and ethnic groups, children - who are at risk of forcible recruitment and sexual violence - and women, who have been the targets of severe restrictions," Zeid said.

The ambassadors of Iraq and Syria, in separate speeches, called for combating "terrorist groups" in their homelands and for halting the flow of weapons and funds to militants.

"Terrorists must not be armed, the source of financing must be stopped. Infiltration of terrorists from abroad must be stopped," said Syria's new envoy Hussam Edin Aala.

The Council has an independent investigation into war crimes by all sides in Syria, where more than 190,000 documented killings have occurred during the conflict that began in March 2011, according to a report by Pillay last month.

"In the takfiri mind, as we have seen in Nigeria, Afghanistan, Pakistan, Yemen, Kenya, Somalia, Mali, Libya, Syria and Iraq ... there is no love of neighbour - only annihilation to those Muslims, Christians, Jews and others, altogether the rest of humanity, who believe differently to them," Zeid said.

Zeid called for an end to Israel's seven-year blockade of the Gaza Strip and said Palestinians in Gaza and the West Bank deserved to lead a normal life free of illegal settlements and what he called excessive use of force.

On Ukraine, Zeid said "at least 3,000 people" have been killed since fighting began in April and called on the Kiev government, armed groups and neighbouring states including Russia to protect civilians and ensure compliance with international law.

Italy's envoy Maurizio Enrico Serra, speaking on behalf of the European Union (EU), condemned what it called "the aggression by Russian armed forces on Ukrainian soil in clear contravention of international law".

Russia denies accusations by Kiev and the West that it has sent troops into eastern Ukraine to prop up a revolt by pro-Russian separatist rebels.