US Defense Secretary Ash Carter hinted at slowing down troops’ withdrawal on his maiden visit to Afghanistan. 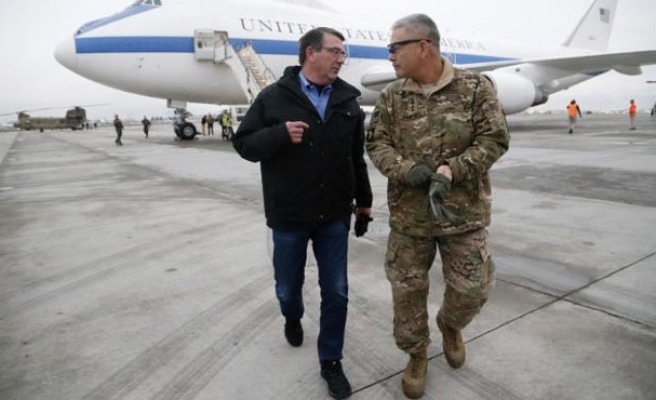 Addressing a press conference alongside President Ghani, Carter said no decisions have been made with regards to the troop withdrawal but President Barack Obama will discuss the U.S. military exit when President Ghani visits the White House next month.

Lauding the peaceful transfer of power in Kabul, he said the Afghan unity government offers new promise for a more effective partnership with Washington in stabilizing the country.

Carter did not describe in detail what changes Obama is considering to the U.S. military presence in Afghanistan.

Answering a question, the U.S. Defense Secretary added that a small number of ISIS militants are present in Afghanistan.

The Afghan president thanked his U.S. counterpart for showing a readiness to rethink the troop withdrawal schedule considering the ground realities in Afghanistan.

According to the current plan, half of the U.S. troops are to leave Afghanistan by the end of this year, a policy that has drawn sharp criticism from Republicans in Congress.

Carter is visiting Afghanistan following the deadliest year on record for Afghan security forces and civilians.

Ghani expressed optimism regarding peace talks with the Taliban to secure lasting peace in Afghanistan. On Friday, he lauded Pakistan’s efforts in this regard.

“We welcome the recent position Pakistan has taken in pronouncing Afghanistan’s enemy as Pakistan’s,” Ghani said in a statement.

Pakistani Interior Minister Chaudery Nissar has been quoted as saying that both countries are enjoying unprecedented levels of cooperation that could do wonders in their counter-terrorism drive.

There have been reports about the Taliban expressing willingness to resume the stalled peace dialogue with the Kabul government.