Before the Obama's visit, "China is opposed to any country's leader meeting with the Dalai Lama in any manner," said Chinese Foreign Ministry spokesman. 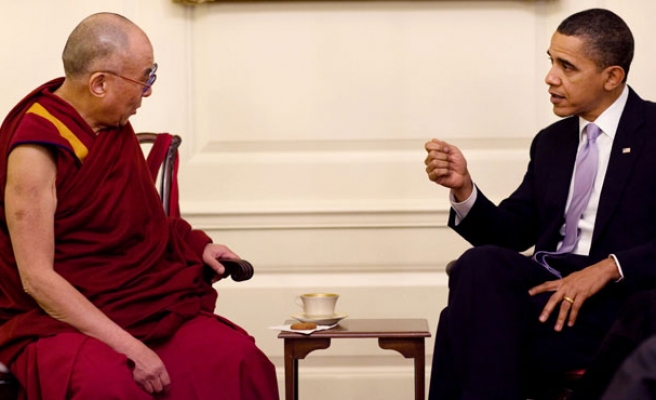 U.S. President Barack Obama warmly acknowledged the Dalai Lama but did not meet directly with him at a religious event in Washington closely watched by Beijing, which has warned against any exchange with Tibet's exiled spiritual leader.

Obama, who greeted the Buddhist monk with a bow-like gesture, called him "a good friend" and "a powerful example of what it means to practice compassion and who inspires us to speak up for the freedom and dignity of all human beings."

Both figures were at an annual prayer breakfast in Washington where Obama spoke about the importance of religious freedom. The Dalai Lama was in the audience at a table in the front row across from the president along with senior Obama adviser Valerie Jarrett, a signal of White House support.

Obama nodded and smiled at the Dalai Lama, waving after clasping his hands to greet the spiritual leader as the event began. Organizers also recognized the monk, prompting applause.

The exchange may still rile China, which bristles at politicians meeting with the Dalai Lama. After the breakfast event was announced, Beijing said it opposed any country meeting with him under any circumstances.

Before the event, an English-language commentary issued by the state-run Xinhua news agency, which while not a formal statement offers a reflection of Beijing's thinking, warned against any encounter.

"Chumming with a secessionist is playing with fire," it said. Any meeting would "dampen the hard-won positive momentum in China-U.S. relations."

Outside the hotel hosting the event, nearly 100 supporters of the Dalai Lama waved Tibetan flags while across the street, about 50 people protested his presence.

The Dalai Lama fled to India after a failed uprising against Chinese rule in 1959 and has infuriated Beijing, which denounces him as a dangerous "splittist" seeking to establish an independent Tibet. He has said he simply wants autonomy for Tibet and does not advocate violence.

Obama and the spiritual leader are both Nobel Peace Prize laureates and have met previously three times, most recently in February 2014.

At the event, Obama echoed some of the monk's own teachings, calling for religious tolerance and noting that too often faith is twisted to justify violence.

"We see faith driving us to do right but we also see faith being twisted and distorted, used as a wedge or, worse, sometimes used as a weapon," he said, citing recent attacks in Pakistan and Paris.