A man in his 70s died in a suspected electrocution after a tree brought down cables in Wiltshire, police said. 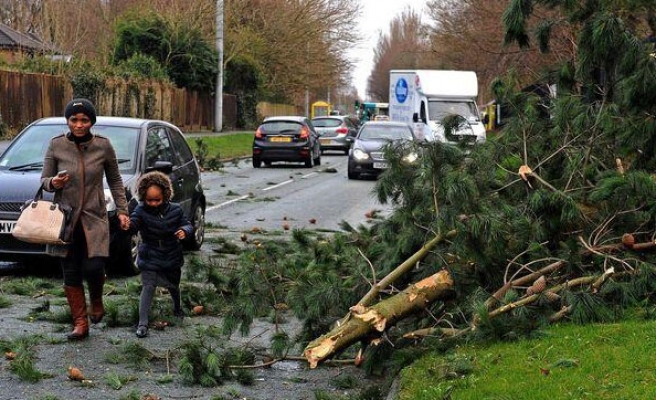 One man was killed and more than a hundred thousand left without power as storms and high winds battered Britain, bringing more misery to already flooded areas and causing widespread travel chaos on Thursday.

Gusts of more than 100 miles per hour (160 km per hour) lashed western England and Wales overnight, Britain's Met Office said, while severe flood warnings remained in place for much of the south and west of Britain.

A man in his 70s died in a suspected electrocution after a tree brought down cables in Wiltshire, police said while the Energy Networks Association, which represents energy companies, reported that some 130,000 customers had been left without power late on Wednesday.

Parts of southwest England have been under water for weeks after the country's wettest January in nearly 250 years, and areas around the River Thames to the west of London have also been hit by flooding.

Emergency services said they had rescued more than 850 people from their homes along the Thames in Surrey since Sunday as the river rises to its highest level in places for more than 60 years.

The severe weather has led to major travel disruption with motorways and bridges closed, and many rail services cancelled.

"All customers to abandon travel #Ukstorm," Virgin Trains, which runs services to northwest Englandwrote on its Twitter website on Wednesday night.

Prime Minister David Cameron has promised that "money was no object" in the relief effort with fears that there was more bad weather to come. The British army officer leading the flood recovery efforts has described as "an almost unparalleled natural crisis".

Meteorologist Charlie Powell said conditions were expected to improve on Thursday but more "wet and breezy" weather was expected at the weekend.

"I don't think it's going to cause as much impact as we have seen," he told Reuters.