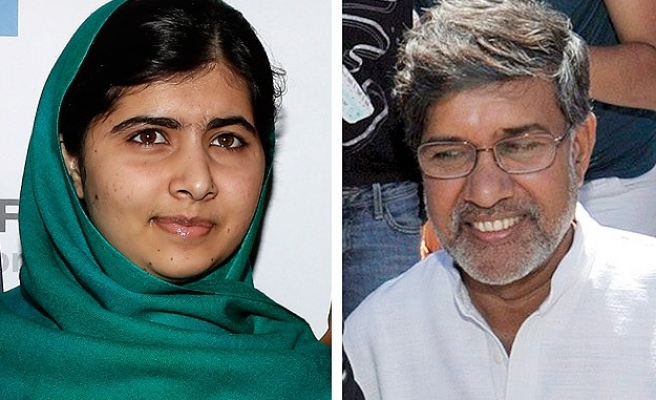 Pakistani teenager Malala Yousafzai, who was shot in the head by the Taliban in 2012 for advocating girls' right to education, and Indian children's right activist Kailash Satyarthi won the 2014 Nobel Peace Prize on Friday.

With the prize, Yousafzai, 17, becomes the youngest Nobel Prize winner, eclipsing Australian-born British scientist Lawrence Bragg, who was 25 when he shared the Physics Prize with his father in 1915.

Satyarthi and Yousafzai were picked for their struggle against the suppression of children and young people, and for the right of all children to education, the Norwegian Nobel Committee said.

"The Nobel Committee regards it as an important point for a Hindu and a Muslim, an Indian and a Pakistani, to join in a common struggle for education and against extremism," said Thorbjoern Jagland, the head of the Norwegian Nobel Committee.

"It has been calculated that there are 168 million child labourers around the world today," Jagland said. "In 2000 the figure was 78 million higher. The world has come closer to the goal of eliminating child labour."

Satyarthi has headed various forms of peaceful protests and demonstrations, focusing on the exploitation of children for financial gain.

Born in 1954, Satyarthi has defended children’s rights since the 1990s. He is the founder of the Bachpan Bachao Andolan institution which has freed more than 80,000 children from slavery and other forms of servitude.

The institution still continues to serve child victims in various fields such as re-integration, rehabilitation and education.

Speaking to the Times Now TV channel, Satyarthi said: “I’m feeling quite happy because it is the first time an Indian has got the Nobel Peace Prize and this is an honor for all my fellow Indians as well as an honor for all those children whose voices were never heard before properly.”

Yousafzai was attacked in 2012 on a school bus in the Swat Valley in northwest Pakistan by masked gunmen as a punishment for a blog that she started writing for the BBC's Urdu service as an 11-year-old to campaign against the Taliban's efforts to deny women an education.

Unable to return to Pakistan after her recovery, Yousafzai moved to Britain, setting up the Malala Fund and supporting local education advocacy groups with a focus on Pakistan, Nigeria, Jordan, Syria and Kenya.

The prize, worth about $1.1 million, will be presented in Oslo on Dec. 10, the anniversary of the death of Swedish industrialist Alfred Nobel, who founded the award in his 1895 will.

The first Noble Prize in Peace was awarded in 1901; 103 individuals and 22 organizations have received the honor since then.