Record number of migrants die at sea, in deserts this year 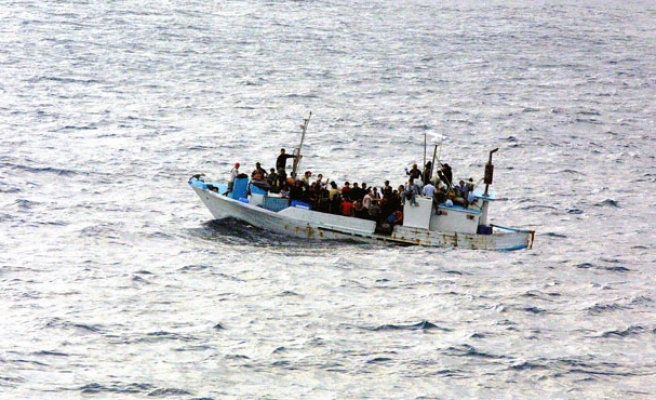 A record 4,077 migrants have died already this year crossing deserts and seas worldwide, three-quarters of them in perilous journeys across the Mediterranean trying to reach Europe, an aid agency said on Monday.

They include an estimated 500 people fleeing Africa and the Middle East feared drowned in a shipwreck off Malta in mid-September after smugglers deliberately rammed their boat, the International Organisation for Migration said.

In its first comprehensive report on such deaths, the IOM said 40,000 migrants worldwide are believed to have perished since 2000, 22,000 of them seeking a better life in Europe.

"Limited opportunities for safe and regular migration drive would-be migrants into the hands of smugglers, feeding an unscrupulous trade that threatens the lives of desperate people," IOM Director-General William Lacy Swing said in a statement. "We need to put an end to this cycle."

A record 3,072 migrants have drowned trying to cross the Mediterranean so far this year, as the "sailing season" draws to an end, against some 2,360 in 2013, according to the IOM report: "Fatal Journeys: Tracking Lives Lost During Migration".

But information is patchy and trends vary regionally, said Frank Laczko, head of IOM's migration research division who led the study launched after 360 mainly Eritrean migrants drowned in a shipwreck last October near the Italian island of Lampedusa.

The Geneva-based agency has kept records on Europe since 1988, he said, adding: "I don't think we've seen a year when we had so many deaths as this year. It's still September."

Turmoil in the Middle East and parts of Africa have sparked an exodus of desperate people trying to reach Europe, it said.

The going price for crossing the Mediterranean is between $2,000 and $4,000 a person, and smugglers are believed to have earned $500,000 on a single voyage, spokesman Joel Millman said.

"When Syria got even worse this year with ISIS taking over parts of the country, that's when you started seeing a lot more Syrians on these boats," Millman said.

"In the 51-day conflict in Gaza when the ceasefire finally came, that's when you started seeing a lot of Palestinians coming, and the breakdown of authority in Libya created an opportunity," he said, citing the chaotic North African state.

The IOM said survivors and relatives of the dead should be encouraged to speak out to help prevent further tragedies.

"That's really our point today, to draw attention to the enormous inhumanity that's taking place and we need to galvanise international opinion and try to amplify the voices of those who have lost loved ones so that others don't take this foolhardy step and walk into the hands of smugglers who have nothing but cynicism in their hearts," IOM spokesman Leonard Doyle said.

The IOM also called for more concerted investigation and prosecution of human smugglers.

In many cases migrants often disappear and die without a trace, and their families never know their fate, the IOM said.

"In the majority of cases we're not even able to determine the gender of person who has died. We have very basic information about the numbers of deaths and missing persons," Laczko said, noting that many returned bodies were decomposed.

Hundreds perish every year on the journey fleeing Central America through Mexico to the United States, enduring the desert heat or robbings and beatings along the way, the IOM said.

The U.S. Customs and Border Protection agency has been grappling with a surge of children trying to slip into the United States, often hoping to join a parent already there.