Turkish group sets up water tanks for refugees in Yemen 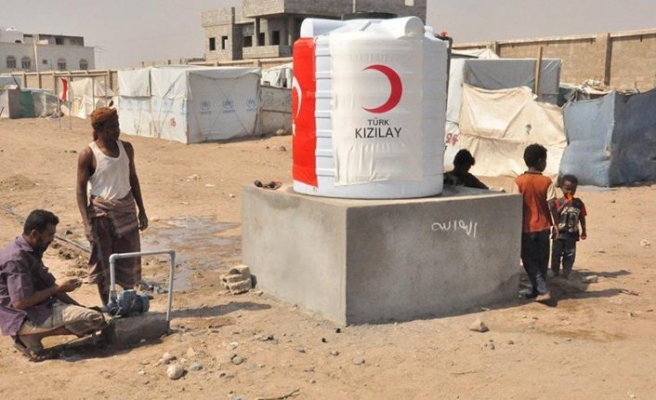 The Turkish Red Crescent (Kizilay) has set up water tanks for refugees in the coastal Yemeni city of Aden.

Sancar said that refugees are in need of many things, especially water, to survive.

"Since our arrival, we have been carrying out our projects to satisfy drinking water needs of our Yemeni siblings in tent cities, who had to migrate from their homes because of the civil war," he said.

The water tanks will serve the drinking needs of 100 families at the camp, he added.

Abdulsaid Ahmed Uvaid, a refugee at the camp, said that the Turkish Red Crescent has brought water to their camp.

"Previously, we used to get water from outside, now we can get it here," Uvaid said.

He said the refugees in the camps need food and medicines to fight bone and kidney diseases, as well as cancer.

Yemen has been dogged by conflict since 2014, when Houthi rebels overran much of the country, including the capital Sanaa, forcing the government to take up temporary residence in the coastal city of Aden.

The following year, Saudi Arabia and several of its Arab allies launched a massive air campaign in Yemen aimed at retaking Houthi-held territory on behalf of the country’s pro-Saudi government.

The air campaign has devastated much of Yemen's basic infrastructure, including health and sanitation systems, prompting the UN to describe the situation as “one of the worst humanitarian disasters of modern times”.

The Turkish Red Crescent and other groups which provide aid, including Turkey’s state Religious Affairs Directorate (Diyanet), have recently launched campaigns to raise money to help the people of Yemen.