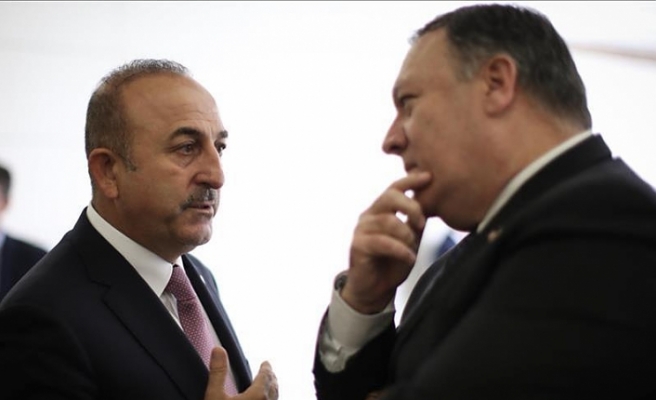 Mevlut Cavusoglu and Mike Pompeo discussed the latest developments in Syria, said the sources, who asked not to be named due to restrictions on speaking to the media.

"Today, we discussed the latest developments and the steps that should be taken [in Syria]," Cavusoglu said on Saturday at an event in Turkey's southern Antalya province.

Cavusoglu said Washington decided to withdraw its troops from Syria after Turkish President Recep Tayyip Erdogan's firm stance against removing threat coming to Turkey from east of the Euphrates River in Syria.

He added Turkey will not seek permission from anyone on its fight against terrorist organizations.

Last December, Trump announced plans to withdraw all U.S. troops from Syria, claiming that American forces had defeated Daesh there.

Senior U.S. officials and lawmakers have called on Trump to not abandon the PYD/YPG as he pulls out of Syria. National Security Advisor John Bolton conditioned the exit on guarantees from Turkey not to attack the group -- angering Ankara.

Turkey has criticized the U.S. working with the terrorist PKK/PYD to fight Daesh, saying that using one terror group to fight another makes no sense.

State Department's deputy spokesman Robert Palladino said in a statement that the two ministers agreed on the importance of continuing U.S.-Turkish consultations as part of the "deliberate and coordinated" withdrawal of American forces from Syria.

He added Pompeo also stressed the importance that the U.S. places on the protection of forces, namely PYD/YPG, the Syrian offshoot of PKK terror organization.