Ukraine conflict to dominate talks as Kerry lands in London

The Ukrainian conflict was expected to dominate the talks between Kerry and British Foreign Secretary Philip Hammond. 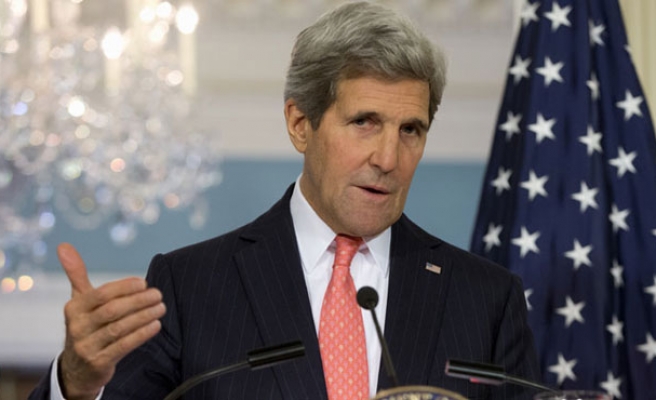 U.S. Secretary of State John Kerry arrived in London on Saturday for meetings with his British counterpart, and a senior official said they would discuss possible penalties that could be imposed against Russia if violence in eastern Ukraine continues.

The senior U.S. official said the Ukrainian conflict was expected to dominate the talks between Kerry and British Foreign Secretary Philip Hammond. The discussions would also cover the fighting in Syria and Iraq, Nigeria's upcoming election as well as the Israeli-Palestinian situation, the official said.

Ukraine accused Moscow on Friday of sending more tanks and troops into eastern Ukraine despite a European-brokered truce that went into force last Sunday.

Moscow did not immediately respond to the accusation but has always denied accusations in the past that its forces are fighting in Ukraine.

"There is no question there have been a huge number of violations (of the ceasefire)," the senior U.S. official told reporters. "The question is what is the status of where we think this is going from here and what are the costs that should be imposed," the official added.

Washington warned Russia on Friday that the continued support of separatists fighting in Ukraine was a direct threat to the "modern global order".

Western nations have clung to the diplomatic route in dealing with the conflict, even though the rebels seized the strategic town of Debaltseve, in defiance of the ceasefire brokered by Germany and France, inflicting one of the worst defeats on Kiev in the 10-month-old conflict.

U.S. President Barack Obama's administration has said it is considering deepening sanctions against Moscow and is weighing the possibility of arming Ukraine's military to defend itself.

The U.S. official said the London discussions would also focus on Nigeria's upcoming election on March 28, which was postponed earlier this month, and increased violence by militant group Boko Haram.

The United States has said it is concerned with the delay.

"We are very interested in these elections going forward," the U.S. official said.

Kerry travels to Geneva on Sunday for two days of talks with senior Iranian officials on Tehran's disputed nuclear programme as the sides try to resolve differences before a March 31 deadline for a basic framework agreement.

U.S. Energy Secretary Ernest Moniz will also attend the talks, the first time he has participated in the Iran negotiations, the U.S. official said.

The U.S. official said Moniz's involvement was due to the technical nature of the current talks. "What it indicates is the extreme technical and detailed nature of where we are in the talks right now," the official added.