About 1.7 million refugees in Jordan, Turkey, Lebanon, Iraq and Egypt will have their electronic food vouchers topped up by mid-December, so they can purchase food in local shops. 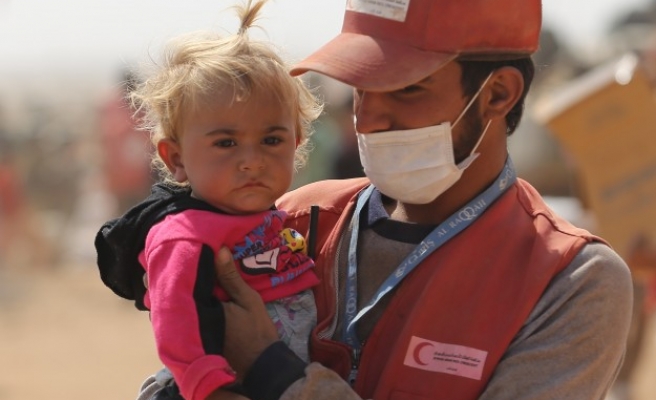 The U.N. World Food Programme is restarting food aid for 1.7 million Syrian refugees in Jordan, Lebanon, Turkey, Iraq and Egypt after it received enough donations to fund the halted programme.

The WFP said on Dec. 1 it was suspending the aid because it had run out of money. This meant electronic vouchers allowing refugees to buy food in stores were not topped up for December, putting them at risk of hunger during the harsh winter period.

The agency said on Tuesday that a fundraising drive since then had raised $80 million, which will allow it to distribute new funds of around $30 per family member by mid-December and also leaving some funding for next month.

"This outpouring of support in such a short time is unprecedented," WFP Executive Director Ertharin Cousin said in a statement.

"We're especially grateful to the many individual members of the public who reached into their own pockets to send whatever they could to help Syrian refugees who have lost everything."

Government donations made up the bulk of the amount raised while individuals and private sector donors in 158 countries contributed $1.8 million, it added. It did not say which states had donated money.

Syrian refugees who had their food aid cut said that without it they would be unable to feed themselves, educate their children or warm their tents through the winter.

Syria's civil war is entering its fourth winter and donors have provided just over half the money the United Nations sought this year.

The U.N. refugee agency urged rich nations on Tuesday to show solidarity with Syria's neighbours by making pledges to resettle the most vulnerable Syrian refugees, including torture victims and women caring for children on their own.

"We all know that the conflict in Syria has triggered the most dramatic humanitarian crisis the world has faced for a long time," U.N. High Commissioner for Refugees Antonio Guterres told the first ever ministerial-level pledging conference on resettlement for Syrian refugees.

"This opportunity today is an opportunity to express solidarity both to the Syrian people and to those countries around Syria that are the first line of defence of us all in relation to the risks of insecurity and instability that Syria has created," he told delegates from around 40 countries.

Highlighting the struggles host communities face as a result of accommodating millions of Syrians - few jobs, lower wages, strained infrastructure, pressure on water, electricity, education and health services, Guterres said: "I have to say the world has a debt of gratitude to the neighbouring countries that it probably never be able to fully pay and fully express."

UNHCR wants to resettle 130,000 Syrians outside the region by the end of 2016 and is nearly half way to reaching its goal.

But with almost half Syria's population either uprooted from their homes inside the country or refugees abroad, there will be a need for resettlement for years to come, the agency says.

"What we aim at is the possibility to have in the near future resettlement or humanitarian admission opportunities for one tenth of the refugee population in the neighbouring countries," Guterres said.

But aid agencies say rich countries could do more.

Many groups including Oxfam, Refugee Council and Save the Children say wealthy nations should agree to take at least 5 percent of all Syrian refugees by the end of 2015.

Guterres also thanked countries that have offered options other than traditional resettlement such as admitting Syrians on humanitarian visas and family reunification programmes.

He drew attention to the plight of Syrians who have died trying to cross the Mediterranean or to reach safety have "put themselves in the hands of traffickers and smugglers."

Countries that have taken alternative approaches include Brazil, which has issued 4,200 humanitarian visas, and Switzerland, which has issued nearly 4,000 visas under a family reunification programme since 2013, UNHCR said.