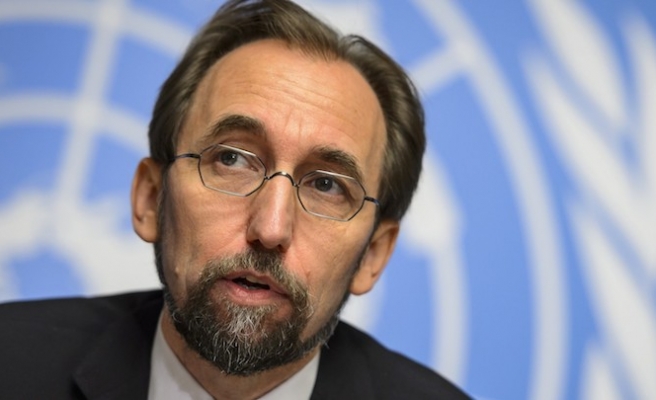 A growing number of refugees worldwide are fleeing "sickening atrocities" and often encounter cruelty and xenophobia instead of compassion, the UN's rights chief said Monday.

"Conflicts in Syria, Iraq and elsewhere have unleased a toxic brew of malevolent forces, including the commission of sickening atrocities, and the emergence of human trafficking gangs," Zeid Ra'ad Al Hussein said.

"These are the circumstances that refugees are increasingly fleeing. The trauma they have suffered is appalling, (and) they deserve the international community's sympathy and compassion," he told the opening of the UN Human Rights Council's main annual session.

Instead, they were being met by "a rising roar of xenophobia," he said.

"To keep building higher walls against the flight of these desperate people is an act of cruelty and a delusion," he said.

His comments came against the backdrop of Europe's spiralling refugee crisis, after more than one million people arrived on the continent last year, with the influx showing no sign of abating.

On Monday morning, Greek police said more than 7,000 people were massed at the border, in a buildup triggered by Austria and Balkan states capping the numbers of refugees entering their territory.

Zeid rejected such policies and the accompanying growing anti-refugee and anti-minority rhetoric, warning that while this "may offer instant political gratification in some quarters, (it results) in divisions that cut deep."

"When leaders express, or ignite, waves of hate speech, as we have seen in recent months -- hate speech against refugees, and specific ethnic and religious groups -- they are setting off shockwaves whose impact will lead to violence," he said.

He warned against the "distorted image of so-called invasion by people who are manifestly fleeing countries no longer safe for human life."

"While I do not belittle the logistical difficulties (the arriving refugees) may create, they are a threat to no society," he insisted.

Zeid also cautioned against allowing the fear of terrorism to push countries to throw away the hard-won rights of their citizens.

"Crushing human freedoms will not protect us from terrorism," he said, pointing to the fear surrounding the brutal Islamic State (IS) jihadist group in particular.

"We must not throw our principles and our reason overboard because we are petrified by the grotesque abuses of a few thousand fanatics," he said.

Zeid said that while IS clearly "is a powerful force for ill... Its behaviour and its mindset are so inhuman that it can only thrive in an atmosphere of deprivation and hate."

"This is a threat that can be overcome."