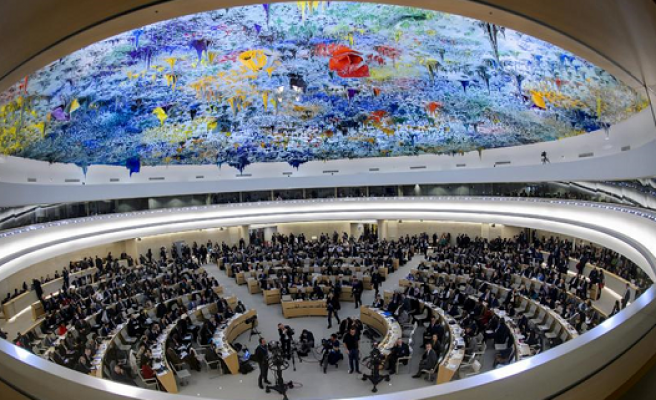 After rejecting recommendations on ending extrajudicial killings (EJK), the Philippine government claimed a huge victory, in the review of its record by the United Nations Human Rights Council (UNHRC).

This, despite the disappointment of several states over its rejection of key recommendations they made.

On Friday, the Philippine delegation led by Department of Foreign Affairs Secretary Peter Cayetano and Ambassador Evan Garcia, Philippine Permanent Representative to the United Nations in Geneva, at the 72nd session of the UN General Assembly in New York, rejected several recommendations of the UN member-states to investigate alleged extrajudicial killings blamed on President Rodrigo Duterte's war on drugs.

Cayetano earlier only accepted 103 out of the 257 recommendations made by member-states for its Universal Periodic Review in the same venue last May.

"The final adoption of our UPR Report during the 36th Regular Session of the Human Rights Council in Geneva demonstrates that the Philippines has nothing to hide with its human rights record."

However, Cayetano snubbed recommendations relating to the protection of journalists and human rights defenders, as well as those urging it to lift conditions to allow access of the UN special rapporteur on extrajudicial killings.

He then quoted the Philippine Mission to the UN in Geneva as saying the report was “warmly welcomed” by Association of Southeast Asian Nations members Laos, Malaysia, Singapore, Myanmar and Thailand, “which all commended the country’s human rights achievements.”

The UPR of the UNHRC is the world's principal peer review mechanism where member-states come together to discuss their human rights policies and plans as well as exchange views on how to improve human rights through international cooperation. It is transparent in its process and member-states interact as sovereign equals.

According to Cayetano, the Philippines will remain resolute in its respect for and protection of human rights as it strives to improve the lives and welfare of each and every Filipino by protecting them from the scourges of drugs and criminality.

"The dignity of the Filipino people is uppermost among our priority concerns," the DFA secretary added.

The adoption is basically that part of the UPR process where member-states confirm which recommendations to accept from those made when then Senator Cayetano presented the Philippine UPR report before the Council in Geneva in May.

For his part, Ambassador Garcia said that this shows the full engagement of the Philippines with the UN Human Rights Council as the most important  international human rights machinery.

Garcia pointed out that “The accepted recommendations mirrored the recommending States’ understanding of the current human rights situation in the Philippines, recognized and respected the State as currently implementing or having implemented them, and were supportive of the Philippines’ pursuit of human rights aimed at uplifting human dignity."

The Philippines fully accepted recommendations that pertained to the sustainable protection of family and society in general. It also accepted those recommendations aimed at enhancing the current capacities of the country to protect the right to life, liberty and property.

The rest of the recommendations that were fully accepted were those that would strengthen international cooperation with human rights mechanisms for the protection of the most vulnerable sectors in Philippine society and the formulation of the national human rights action plan.

Forty-two States are reviewed each year during three Working Group sessions dedicated to 14 States each. The third cycle of the UPR will cover all UN Member States and run until 2021.

The Philippines was one of the first 47 members of the then newly created HRC in 2006. It is currently serving its 4th term as member in the Human Rights Council.

Adoption of the UPR outcome report does not only cover the Philippines' report, but also the other states' positions on its human rights record, which included calls to investigate killings.