US, Italy warn of rising ISIL threat in Libya

Italian Foreign Minister and US Secretary of State tell their allies that ISIL is adapting to the pressure on its heartland and is redirecting its efforts towards Libya, where it has seized new territory 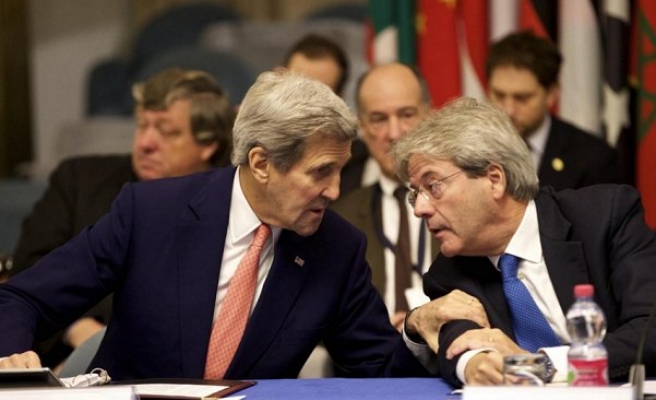 The United States and Italy warned Tuesday that the ISIL group is expanding its reach, threatening to seize Libya and launch attacks in Western countries.

But as representatives from the 23 countries of the U.S.-led coalition battling the extremists' self-declared "caliphate" reviewed their progress at talks in Rome, Italy and France made it clear military action against ISIL's Libyan wing is not on the immediate agenda.

Italian Foreign Minister Paolo Gentiloni and U.S. Secretary of State John Kerry opened the talks by telling their allies that, since their meeting six months ago, the ISIL group had suffered setbacks in its core territory in Syria and Iraq.

But the hosts warned that the group is adapting to the pressure on its heartland and is redirecting its efforts towards Libya, where it has seized new territory, and into attacks like those in Paris, Ankara and San Bernadino, California.

"We are surely not here to brag about anything," Kerry said, after saying ISIL fighters have lost 40 percent of their territory in Iraq and 20 percent in Syria.

Gentiloni said the challenge facing the coalition of mainly Western and Arab nations is stark.

"We know that we have in front of us an organisation that is very resilient and able to plan strategically and so we should not underestimate it," he said.

"If anything we need to be ever more wary and more watchful because we know that the more Daesh is squeezed in its core territories, the more tempted it is pursue its terrorist activities elsewhere," he warned, using an Arabic acronym for ISIL.

"We are witnessing renewed activity in Libya and in sub-Saharan Africa," he said.

Within the coalition, Italy has taken the lead in planning how to address the ISIL threat which is just a short boat ride from its southern shores, in and around the Libyan city of Sirte.

Rome's focus is on trying to rally the international community behind efforts to create a national unity government in Libya that is capable of stabilising its former colony.

"There is absolutely no question of military intervention in Libya," Fabius said. "There is pressure (for that) but that is not the position of the government."

Gentiloni told the Messagero daily time was running out to stabilise Libya but stressed there was no enthusiasm in Rome or the international community for "hasty military intervention."

Washington says it has built a 66-nation coalition to fight the ISIL group, with Afghanistan becoming the latest country to join, Kerry said.

But a so-called "small group" of 23 nations has taken the lead in carrying out air strikes in Iraq and Syria and training and arming local forces to fight the extremists.

Kerry said the effort now needs to be stepped up, citing the example of Washington's deployment of small numbers of special forces troops inside Syria.

The allies need to "push ahead with a strategy we have learned will work and to do so relentlessly, giving Daesh no time to regroup, no place to run, no safe havens in which to hide," he said.

"We cannot bomb in Syria and negotiate in Geneva," he said in an explicit allusion to Russia's air campaign in Syria.