After four hours of talks, Kerry says the United States and Russia had found common ground on the Syrian peace process and on taking the fight to the ISIL group 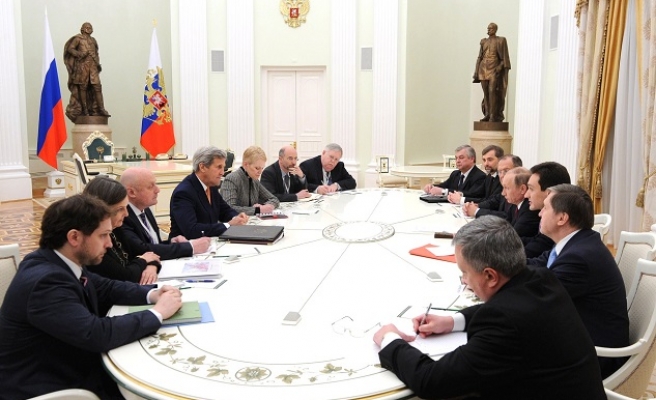 U.S. Secretary of State John Kerry and Russia's President Vladimir Putin agreed on Thursday to intensify the drive for a political settlement in Syria but remained divided over Bashar al-Assad's future.

After four hours of talks at the Kremlin, Kerry said the United States and Russia had found common ground on the Syrian peace process and on taking the fight to the ISIL group.

Before the meeting, U.S. officials had suggested he would sound out the Russian leader about pressuring his ally Assad to step aside as part of the political solution, but afterwards little of this was said.

Kerry noted that Putin had begun to withdraw the Russian forces that had been sent to shore up Assad's rule, and had renewed Russia's commitment to the political process under way at UN-mediated peace talks in Geneva.

"Russia will have to speak for itself as what it's going to choose to do in order to help Mr Assad make the right decisions, but we agreed today... that we will try to accelerate the effort to move the political process forward," he said.

"We agreed on a target schedule for establishing a framework for a political transition and also a draft constitution, and the target is August," Kerry said at a joint news conference with Foreign Minister Sergei Lavrov after the talks.

Lavrov told journalists that Moscow and Washington would now step up efforts to get the Syrian regime and opposition to hold "direct talks" in Geneva, where a round of negotiations that saw a United Nations mediator shuttle between the delegations concluded on Thursday.

"As the immediate task we have agreed to push for the soonest start of direct talks between the government delegation and the whole spectrum of the opposition," Lavrov said, calling for "a transitional governance structure" in the war-torn country.

Putin did not attend the final news conference, but he had unexpectedly warm words for the United States' role in Syria at the start of the Kremlin encounter.

"We understand that what we have managed to achieve on Syria has only been possible thanks to the constructive position of the political leadership in the U.S., the position of President Obama," Putin said.

Kerry said the two sides were looking to bolster the month-old ceasefire between Assad's forces and the opposition hammered out by Putin and Barack Obama.

"We agreed today to build on recent gains to take immediate steps to reinforce the cessation of hostilities," Kerry said, adding this included "steps to end the use of any indiscriminate weapons, to halt attempts by either side to seize new territory and to finalise a common understanding for how this cessation can be institutionalised."

"We agreed that the regime and the opposition need to begin releasing detainees," he added.

Lavrov told Kerry that diplomatic efforts had been focused on creating a "balance of interests" among all sides involved in the Syrian crisis, including Moscow and Washington.

But U.S. officials fear the Syrian opposition will drop out of UN-mediated peace talks in Geneva unless Russia's ally Assad agrees to step down as part of a political transition.

Putin has stood by Assad, and even sent Russian warplanes to fight to protect his regime and strike the ISIL, which has seized territory in the east of the country.

But Moscow's partial withdrawal of its forces from Syria has created what Washington believes is an opportunity to press for a change of stance on the regime.

"What we're looking for, and what we've been looking for, for a long time is how are we going to transition away from Assad's leadership," a senior U.S. official told reporters.

In Geneva, opposition negotiators confirmed that they are counting on Russia to keep the pressure on the regime.

After the latest round of talks with UN mediator Staffan de Mistura, opposition spokesman Bassma Kodmani said: "This is a unique moment, a precious moment and we hope Russia will seize this moment and use its leverage."

And de Mistura said Thursday that the UN was aiming to restart Syria peace talks on April 9.

Ties between Russia and the U.S. have been at their lowest point since the Cold War amid fury over the Kremlin's meddling in Ukraine. Kerry insisted Washington was not backing down on the crisis.

Kerry said Ukraine's territory still includes the Crimean peninsula, which Russia annexed two years ago, as well as disputed rebel-held areas in the east of the country.

He also said that he had raised the issue of freeing Ukrainian pilot Nadiya Savchenko after she was sentenced this week to 22 years in jail over the killing of two Russian journalists following what the West has condemned as a politically motivated sham trial.